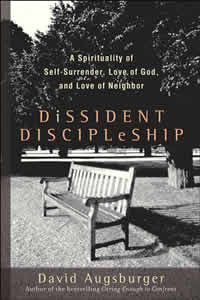 If you want a good read as an introduction to what we like to call Christian anarchism David Augsburger's Dissident discipleship may be your best start these days. He does not mention Christian anarchism at all, but he writes all the right things about follwing Christ in these times. The author is Anabaptist (Mennonite, I warmly refer to a name derived from a great man from NL) and he simply follows the tradition of this denomination. Which happens to be closer to mine than Dave Andrews' evangelicalism, so I state I like Augsburger's book better as a contemporary introduction.
Augsburger gives many small stories about the Very Great Story and many insightful quotations, many of these are from probably the biggest name in Christian anarchism, Tolstoy. (But puhleeease - why Bono? [1 mention in the link].)

He introduces songs or verses for what he calls peditation, etymologically fitting word for walking medtitation. The walking rhythm is supported by five- or three-syllable verses (which works well in increasingly monosyllabic English, for other European languages this might prove more difficult).
An example:

Good men look
other way.
Much to do!
Seize the day!

Cares, although
not his class,
lifts him on
his own ass.

Picks up check
at the inn,
on return,
checks again.

Jesus asks
critics dim,
"Which of these
neighbored him?"