War for the sake of war 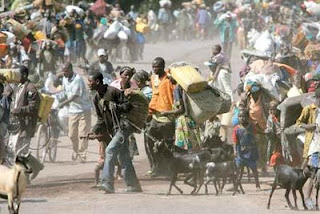 A few days ago, in his unbearably simplified song of praise of Charles Darwin, Andrew Marr stumbled upon the European question of the barbarism of World War I. The barbarism - how could we think otherwise - was started by the Germans, the programme said. (In the story it was suggested there was some connection to evolution theory).

This barbarism could then, and can now only be a surprise if you discard the story of European expansion. The genocide on the original peoples of the Americas and Australia, using hunger as a tool of submission in nearby Ireland and at a larger scale in India, slaughter in Indonesia, Southern Africa and above all, the Congo, and the list is far from complete.
The slaughter in Congo is still going on, but now as then it is easy to look away.

The deadliest war in the world today is the Congo War, a.k.a., the African holocaust or the African World War, a covert U.S. war waged by African proxy armies to secure Congo’s unparalleled natural resources. To secure, above all, the “geostrategic” cobalt reserves in the Katanga Copper Belt, which runs through DR Congo’s southeastern Katanga Province and into its southeastern neighbor, Zambia.

Cobalt is essential to our military industries’ ability to manufacture the modern weapons of war. So, the Congo War, a.k.a. the African holocaust, is a war for the sake of war itself.

Even the complicit United Nations reports that the Congo War is the most lethal war in the world today, with the highest death toll since World War II, though the U.N. does so primarily to fundraise for ineffective mega-U.N. charities like UNESCO, UNICEF and the UNHCR. It has never censured the United States or any other imperial power for arming, advising and ultimately controlling myriad armies and militias in DR Congo.

Many Americans who supported Barack Obama had hoped for a de-escalation of the war, the perpetual, post-09/11 War on Terror, in Iraq, Gaza, Afghanistan and Pakistan and even the covert U.S. war in DR Congo, the war for the sake of war itself.

And many are now shocked by Obama’s decision to leave 50,000 troops in Iraq, to send 17,000 more to Afghanistan, to bomb Pakistani insurgents and to stand behind Israel, no matter how mercilessly it bombs Gaza. And, to hike the U.S. military budget by 4 percent in 2010, startling even Robert Gates, Bush’s former defense secretary, who is now Barack Obama’s.

The war in the Congo for minerals essential to warmaking all over the world uproots and kills Congolese in cities, towns and even remote villages.
The Congo War continues, with little protest visible beyond the Internet. It moved into a new phase on Barack Obama’s Inauguration Day, Jan. 20, 2009, when new, wholly illogical military alliances emerged. The official story advanced then and since by the U.S. State Department, the Rwandan, Ugandan and Congolese governments, and the U.N., then regurgitated by obedient corporate news outlets, is that the Rwandan Defense Forces (RDF), instructed by U.S. military advisers, crossed into southeastern DR Congo to join the Congolese Army (FARDC), the U.N. peacekeepers (MONUC) and the Congrès National pour la Défense du Peuple (CNDP) in hunting down rebel Gen. Laurent Nkunda, the former commander of the CNDP, one of the groups now allied to hunt down both him and his career enemies, the Forces Democratique de Liberation du Rwanda (FDLR).

In December 2008, reports were that on the Ugandan border of Eastern Congo, U.S. military advisers had helped organize the Ugandan army (UPDF) to cross into northeastern DR Congo to join the Congolese army and the U.N. peacekeepers (MONUC) in hunting down the Lord’s Resistance Army (LRA). In March, the Congolese government agreed to let them stay, indefinitely.

In Kigali, Rwanda, on Jan. 7, 2009, soldiers with the Rwanda Defense Forces are trained by U.S. soldiers as part of U.S. Africa Command’s (Africom’s) African Deployment Assistance Phase Training (ADAPT) program. – Photo: www.Army.mil
These alliances and these accounts of them are so riddled with contradiction that deconstructing them would only play into the hands of those so carefully obscuring the fundamental reality of the Congo War. How many Americans would be anything but dizzy and confused by this list of acronyms for just the best known militias and armies fighting in DR Congo: CNDP, FDLR, UPDF, RDF, FARDC, MONUC?

So, let’s forget the acronyms; forget all the African militias and armies fighting proxy wars for the imperial interests of the U.S. and other imperial powers. Americans should understand instead why the U.S. is fighting a covert war in DR Congo.
High stakes

The stakes in the Congo War are enormously high. They include:

1) War itself, because, again, the Congo war is, above all, a war for cobalt, the mineral most essential to the manufacture of modern weapons of war. Cobalt is required to build jet fighter bomber engines, missiles, including nuclear missiles, battleships, including our nuclear submarines and aircraft carriers, and virtually all modern industrially manufactured weapons of war, except perhaps biological and chemical weapons.

Cobalt is essential to the manufacture of anything requiring high grade steel.

Shocks in cobalt’s supply and price during the 1970s and early ‘80s led to a 1982 Congressional Budget Office document warning that the U.S. would have to be prepared to go to war to secure cobalt reserves so as to secure the power to manufacture for war, especially in time of war.


The war for control of Congo’s wealth has killed 6 million and displaced many millions more.
2) An ongoing African holocaust, the systematic destruction of the Congolese people. Six million have died, according to widely acknowledged sources including the International Relief Commission and the U.N. Forty-five thousand Congolese continue to die every month, with no end in sight; many die in refugee camps of starvation and easily curable disease, and one third of these are children.

3) Barack Obama’s legacy, and our legacy, as the Americans who elected him. Will our legacy be an ongoing African holocaust, another 6 million African Congolese lives? Will it be the expansion of Africom, the U.S. Africa Command, throughout Africa and the further plundering of Africa’s resources?

Some, including Black Agenda Report editor Glen Ford, say that Barack Obama is “U.S. corporate empire in Black face” or that corporate America desperately needed a Black face now. This is arguable, especially given that, in 2007, Africa surpassed the U.S. wartorn Middle East as a source of U.S. oil imports.

However, though huge corporations generously filled Obama’s campaign coffers, so did many everyday Americans, who also organized and rallied for Obama with high hopes of peace and change. Many now at least seem to have a place at the table that they didn’t have before.

Can they use it to call for an end to the covert war in DR Congo? First, more Americans will have to find DR Congo on the map, even amidst the toughest times since the Depression.