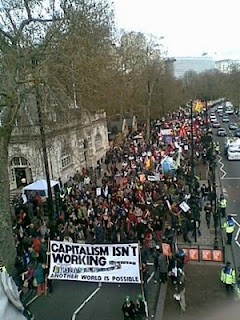 The ever so superficial - it is meant to be that way - One Show at the BBC-TV had an item about a female member of the Salvation Army, taking part in the demonstration of March 28th in London: Put People First/Jobs, Justice, Climate. She seemingly went to the demo alone and there "met her first anarchist". She met several of them, but only one was willing to exchange some words with her in front of the state television's camera.

Her first anarchist? She thought it interesting. Well, it was more sympathetic than this piece (which certainly is not the stupidest around these days...).

For the past ten, fifteen years I have been involved in actions in which Franciscans, Augustinians, several ministers of the Reformed Church, Remonstrants, Mennonites fully participated. More consistently than student-like people calling themselves anarchists (which frequently only lasts as long as it lasts, if you see what I mean).
My second lecture on Christian anarchism I gave to Carmelite sisters on Mt. Carmel itself. They were not afraid. They were behind bars, but that is a different story - they always are. (The first lecture was on Mt. Carmel too, at the University of Haifa).
I frequently retreat and study Christian anarchism in a Benedictine convent, a few times I did the same in a Syrian Orthodox monastery, in Syria itself, amongst others.
Was I "their first anarchist"? Who would care?

Would it have been a - sadly missed - missed opportunity to tell about Christian anarchism? Including that one Dutch Christian anarchist from the Salvation Army, author of so many edifying children's books? About the English tradition of Christian anarchism, about Garden cities, the journal New Order, Jesus Radicals, not mentioning 360 years ago, the Diggers...
No, don't think so.
After all, it was the One Show. Still more sympathetic than the printed mainstream press, though.

Shake and tremble, ye masters of the earth, for April 1st hahaaaaaaaaa.....