So immensely bored with identity politics 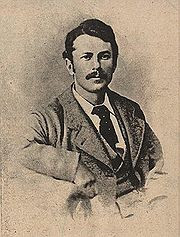 Probably I had read the name before, but I first consciously heard about Edward Carpenter when I was trying to organise a symposium Christian anarchism - paradox or paradigm?, some ten years ago. It did not happen, I will not go into that now. Who knows, maybe the time is right, now.

Edward Carpenter perfectly fits the description of a Christian anarchist of about a hundred years ago. Here you can read his Pagan and Christian creeds: their origin and meaning, online. Tolstoy refers to him as being one of the noblest of souls.

And he was gay, in the sense this word is now being used. (At the time there were other words).

I get a feeling of annoyance, of boredom, of utter disrepect of all kinds of identity politics academics, especially of the trotskyite brand. I read about a biography, Edward Carpenter: A Life of Liberty and Love, written by Sheila Rowbotham, and I fear.
I have read one book of this author. The first chapter had a title with this word in it: tobagganing. The question she asked: do I like that?
I don't know, and frankly I don't want to know. I am still not willing to pick up a dictionary to see what this may be all about. Spare me words I don't know in your language which as far as I can see are in no way relevant to the subject.

I have doubts and fear about this biography.
You see: Edward Carpenter was gay.
Do you really feel the depth and the importance of this communication?
He was GAY.
So he was not Straight.
He was GAY.
Amaaaazing, innit. He was GAY.
He apparently did not practise, perfectly along the tolstoyan lines, but woman! he was GAY!
How utterly interesting. A GAY man, a hundred years ago.

If anyone knows this book and is willing to chase away my doubts and fear, please let me know.

A few years ago someone took the immense trouble to write a book about Dutch religious anarchist/socialist Clara Meijer-Wichmann. Actually, she was not all that Dutch, but she lived and worked in the Netherlands, and nationality or background do not matter, do they?
Perhaps they do for identity politics types.
She was married to a conscientious objector, Jo Meijer, whose name she proudly wore.
That cannot be right! She is supposed to be a feminist! (Just like Emma Goldman she was not keen about feminism. Does not matter for the identity crowd).
And so the identity crowd robs her of this name, leaving the hateful Wichmann - her brother was the founder of Dutch fascism but she did not live to see that - serves her right.
She died giving birth to a child, as a Dutch Mary Wollstonecraft.
She was a brilliant jurist and sociologist. And a religious anarchist, as I said, founder of the Abolitionist Movement in NL, and so much more.

But for the identity crowd only one thing turned out to be interesting or important.
She was a WOMAN.
Incredible, heh - a WOMAN.
A lawyer and a sociologist - would you believe: a WOMAN.
Do you realise?
A W-O-M-A-N! Woman!
WOOOOMAAAAN!

With friends like the identity crowd nobody needs an enemy.

By the way - have you heard that Special Detail about the President of the United States of America?
Is not it just as lovely as that Prime Minister of the eighties?