Catholic Worker report from the City 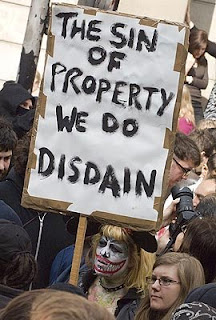 Spotted on Indymedia UK and also to be found on Ciaron O'Reily's own weblog. Not being Roman Catholic admittedly I had to look up what he means with "sorrowful mysteries". Please find out yourself if you do not understand it.

G20-Circled & Shaken Down During the 2nd Sorrowful Mystery

Sometime during the second decade of the sorrowful mysteries, I had a sense we were not alone. Martin, Katrina and I were sat alone in a small East London park facing the Excel Centre where the G20 of the most powerful government leaders were gathered to rearrange deckchairs on their sinking ship. Thousands of police had been deployed around the Excel Centre keeping the few hundreds of protesters who gathered a quarter of a mile from the site. A case of overcatering evidently.
We had somehow managed to get through to this small park for a face off with the building. We were praying seated at a park table when this big guy leaned over me, I looked up to see an automatic rifle in his hands and a pistol strapped to his knee. He told me to stand up slowly. As I did I went to place a paper in my pocket he said “Keep your hands visible”. This guy was serious, I extended my arms away from my body for a frisking and looked around to see 4 other guys and a gal in paramilitary uniforms circling our table all similarly armed with rifles and pistols. 6 of them with 12 weapons, 3 of us with a bible, rosary beads and liturgy sheet. I like these odds.

As Martin stood up he kept reciting the rosary, didn’t break stride. My copy of the Guardian began to flutter in the breeze under the park table I thought I should step out and stand on it so it wouldn’t blow away. I then thought, I really like my left kneecap, stayed stationery, refused to give my name and was detained under anti-terrorist legislation, 5th time in the past year in 3 jurisdictions!

The cops paced around methodically as they checked Katrina and Martin’s bags….these folks were the real deal, the last card in the cop deck. After the 4 million CCTV’s, the fluorescent jacket guys, the riot squads with shields and batons, come these folks I guess.

Our visitors seemed satisfied that our liturgy sheet was not indeed a map of the Excel Centre as reported by their Intel. After we were released from the mystical anti-terror detention and the super cops departed, we returned to prayer and further reflection on these dark times we’re in and what small human response we could muster.

Outnumbered, outresourced, outflanked, but not out of the game - Katrina produced a rainbow PEACE banner and Martin drew up a placard with a quote from Catholic Worker founder Dorothy Day “Our Problems Stem from our Acceptance of this Filthy Rotten System!” and made our way toward the G20 gathering.

Across the city others were being raided, arrested, recovering from wounds and long hours of detention/kettling from the previous day’s scene outside the Bank of England. A lot more good folks, following weeks of media hype and scaremongering, were internally migrating away from expressing dissent in this historic moment wherein the climate and the economy crash. Where this filthy rotten system based on production for production's sake rather than meeting human needs, that operates in the denial that the environment does not have limits to exploitation.

The only way out of this atomised fear and off this sinking ship is nonviolent resistance and solidarity.