Normally I am against the prison system... 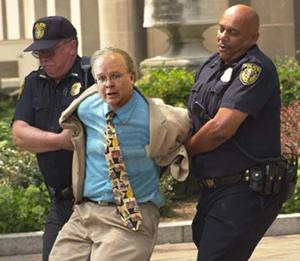 BREAKING NEWS
I don't usually do this but I got this last night and it was too important to wait until tonight to post it here.

ROME (Reuters) - John C. Yoo, a former Deputy Assistant Attorney General of the United States, was arrested on Tuesday in Milan, Italy, and is being held for possible extradition to Spain, where he and five other retired officials who served under former President George W. Bush are expected to be indicted by a Spanish court for violations of the Geneva Conventions, the Convention Against Torture, and the Rome Statute of the International Criminal Court.

Yoo, 41, is a visiting professor of Law at the Chapman University School of Law in Orange County, California, on leave from the University of California Berkeley School of Law. He served in the Office of Legal Counsel in the U.S. Department of Justice from 2001 to 2003. Yoo authored memos permitting the use of torture. Torture is banned by both U.S. law and international conventions.

Milan prosecutor Andrea Spolini released a statement indicating that Yoo can be held for up to 90 days awaiting an indictment in Spain under the international standard of "Rompi Testiculo."

Check out this arrest photo: http://tinyurl.com/dypg7u

The late great Gramsci himself was resurrected from the grave to report this victory of the working class.
Watched the calendar, good friends at the other side of the planet?
Or are you trying to pull our leg?
;-)

Originally I wasn't going to post the fake Reuters story about John Yoo being arrested but I couldn't help myself. Also I think it makes a good point. I'm probably preaching to the converted here sometimes, if you are a regular reader of this site it's a good bet you'd love to see Bush and his gang testify in front of the ICC. And until that happens we all have to do our part no matter how small to ensure that one day they answer for their crimes. So this April write a letter, sign a petition, take to the streets or occupy a government office. For our sakes and for the sakes of our children. If these men are allowed to go unpunished we run the risk of turning the precedents set up after World War 2 into hollow victor's justice applicable only to those who are our enemies.

Let's not be fooled any longer!

Comment: With Milosevic having died in Scheveningen prison, Saddam Hussein hung and Bashir indicted we do not have to bother to think about what is expressed in CR's last sentences. Do not expect George W. Bush or Ehud Olmert in the dock in The Hague any time. And Tony Blair was welcomed by the pope himself as a new member of the Roman Catholic Church instead of being refused.