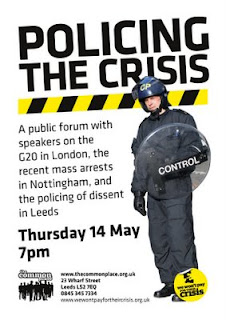 "We will not pay for their crisis" has been called a bad slogan, because it is not anyone's fault in particular that the system is grinding to a halt. That is right - but it stil is their crisis since every form of (re-)producing dominant ideology has been selling the system as the best, nay the only possible world. And they are still trying to sell it that way.

This being said, let us have a look at the policing indeed. How convenient that the highly dangerous terrorists of Pakistani descent have been released on the day the UK budget was getting all the attention. They were not charged of anything.
Apart from being Pakistani apparently, and to be thrown out of the UK because of that.

And of course the officer that beat Ian Tomlinson to death, or Nicola Fisher to the ground, or the officer who was looking forward to beating up long-haired "hippys" (!) at the G20-demonstration of April 1st are all just bad apples in a very sound - erm - orchard.

Let the poster speak for itself. Click on it for a good viewing.