The other night there was an item on Newsnight about kettling, locking people up collectively in open air - as done by the police force in London on April 1st during the demonstrations against the G-20 meeting. Open camp would be a more appropriate (and comprehensible) word for the practice.
An indignant girl was filmed, Newsnight did not give her a name so I chose one for her. She went to take a look from the office and found she was locked up in the street for more than two hours. "Do I look like an anarchist?"
She had short painted hair. I have known lots of anarchist girls with short painted hair. What kind of idea about anarchism and what an anarchist is supposed to look like would she have? An idea developed and groomed by the kind of media she was on, presumably, if not worse...

Does he look like one? Jacques Ellul, theologian and sociologist. Probably Virginia can better identify with women.

Simone Weil? Severe glasses - actually without them she looks stunningly lovely, but I am not supposed to think or say that. Anyway, she looks like a decent office girl, does not she? 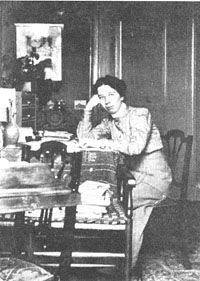 Clara Meijer-Wichmann? You don't have to pretend you know her, because obviously you do not know any of these people, Virginia.... 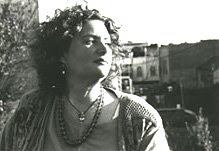 Starhawk? A woman that might have been present at the G-20 demonstration.

Dorothy Day? Does she look like an anarchist? Perhaps she is the best known female anarchist of the past century, although you would not know thanks to mainstream media.


A Dutch protestant newspaper took the trouble to review a journal on Christian anarchism I had edited, A.D. 1991. Those were the days such subjects were still taken seriously by mainstream media. Not long ago, and yet so long ago...
The reviewing editor was convinced that I considered Christ Himself to be an anarchist. Actually, I would never go that far. But I know of at least one Christian anarchist who did - he called Jesus the Loving Anarchist at the Cross. I am not going to argue about it.
We do not know what Jesus looked like, we can be sure that most if not all iconic representations cannot be right. I think the representation in this video for Good Friday is symbolically very well chosen. Virginia, here is an Anarchist for you.