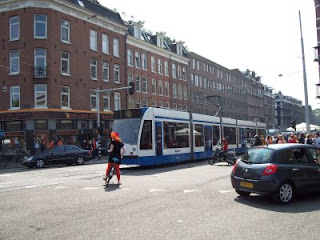 Five people dead, around ten seriously injured and ten others hurt - but we should all utter a sigh of relief. It was not a terror attack, even though the driver who wanted his car to crash into the royal parade did it as an action against the royal family.
But he was an autochtonous Dutchman. That makes it alright, more or less. He has a Christian name, and when I say Christian I mean Christian. Not Mohammed or Idris or Kemal. He is from Huissen, rather biblebeltish, and his given name is Karst. Very much Christian. So it was not terror.
That is supposed to be a consolation to the family of the five deceased and the wounded.

Koninginnedag is very much a party for and of the people (the dictionary says I must translate volksfeest as street party, it does not sound fitting - a national street party perhaps).
The original reason to have spontaneous street festivities on this day was that for a time the day was a good opportunity to rise in anger against monarchy and capitalism and the police. When especially children are admonished to have a garage or attic sale on the streets it is difficult to start a street party of the burning barricade kind.
It was a celebration of the Free Market for quite some time. It was even the name for the street party, vrijmarkt - the one day in the year NL really was a free market society.
Of course it could not last. Shop owners were complaining about competition and so Regulation was introduced, which meant the end of the free market in effect.

Still, Koninginnedag is a day you go out into the streets because Something Is Supposed To Be Happening. Whatever. Police still cannot do very much about children selling stuff, or even adults who do not own a shop doing this. Too much crowd on the streets, wearing orange coloured clothing (The House of Orange, after the principality nowadays part of France, the birthplace of the dynasty). And the crowd is loaded, usually very early in the day - generally as of midnight.

Koninginnedag is usually translated as Queen's day - especially by those organising gay parties on the day - but actually it cannot be properly given a name in another language. It used to be the birthday of the reigning queen, but she abdicated in 1980 and died in 2004. It is best to call it a spring festival with the royal family as an excuse to party. And admittedly, the royal family accepts this role wholeheartedly. Perhaps this will change now, because - well, the attack was not considered as a terror attack, but to any normal person at least five people being killed does not sound fun.
Even the burning barricades might be preferred to this.

April is the cruellest month, it is also the month laden with most memories - at least, to me it is.
And the 30th of April - "Queen's Day" - more or less marks the end of this month of personal remembrance - with more memories. Of finds, usually interesting 45s, which effectively have disappeared from the car boot sales since people still having them probably do not want to get rid of them - so only seventies bulk like ABBA and even worse (incredibly, there are even worse things to be found) still hits the street.
And organising parties yourself, or walking hand in hand through the crowd with the Special Person. Like New Year's Eve, Koninginnedag is a day of thinking back to other days - at least it is for me.
Still special, but alas not very special any more. No interesting stuff any more and too many drunken people you must slalom your way around.
And then there was this attack which they dare call - with a sigh of relief - not a terror attack.
Being an anarchist means at least being in favour of a republic as against a monarchy. NL oddly moved against history, starting as a republic, even being called THE Republic when there were no other republics in Western Europe.
But I frankly am abhorred by the idea - what if this deed of non-terror really had succeeded in wiping out the royal family?

I was looking for a video of the veejay you can admire below - he did a stunning version of the national anthem and a paean for the late queen Juliana. I have not found them on the net.
A special feature of his show was the cupboard filled with files falling down, perhaps hitting some lip-sync-ing artist. It is hard to explain what is so special about the performance of the veejay - understanding Dutch certainly is not enough.
I was looking at a website dedicated to him when I heard a crash on the telly behind my back. "That was the usual cupboard", was my first thought. It was not.
But then again, it was not a terror attack.
"I want to get out of this B-movie," someone interviewed at the scene of the non-terror-attack said.
The ruling order nowadays is neither ruling nor orderly. It has run its time and the cupboard with files may descend upon it any moment.