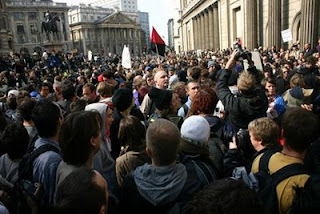 Rumours abound at mass demonstrations which are attacked by the police.
Mainstream media reported earlier on this than the instant news medium Indymedia. But it has become an unavoidable piece of news, and we should not expect more honest reporting about it than about the death of Jean Charles de Menezes. We are not even informed about the name of the victim. [Update below]

In response to the death of a protestor during the demonstrations against the G20 in the City of London on the 1st April 2009, a solidarity demonstration will assemble at Bank at 1pm, today April 2d.

The aim of the assembly is to:

* mark the death of the protestor,
* call for an independent police inquiry
* show solidarity against the enormous police repression that happened against protestors outside the Bank, the Climate Exchange and elsewhere in the City of London.

Any witnesses to this event or any other act of police violence against demonstrators is advised to write a full statement as soon as they possibly can, sign and date it, and give a copy it to a trusted other party. These statements should be sent to
Email: g20witnesses [at] gmail.com

The Guardian states the deceased, 47 year old Ian Tomlinson, lived in the City and was on the way home from his Newsagents shop, no information if he was caught up in the demo or whether he took part.

Jasper Jackson, 23, from London, who photographed Mr Tomlinson's collapse, said he had been standing in front of a line of police dog handlers minutes before he fell over. "The picture I have of him is of him stumbling in front of the protesters and in front of the police dogs looking dazed," he said. "He had a glazed look on his face. Then it was drawn to my attention that somebody shouted to the police with a loud hailer that there was a casualty and said, 'Can we get a medic?' "

The officers were white as sheets," said Andy Bowman, a 24-year-old PhD student. "The blood had drained from their faces. They were giving us conflicting stories about what had happened; some of the officers were saying he had a blow to the head and some were saying he'd collapsed of a heart attack.