Being ready to murder as a way of life 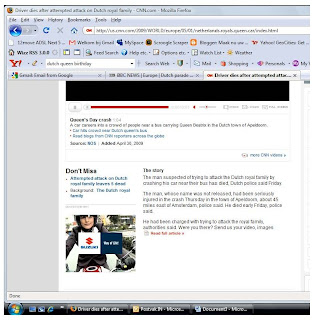 The attack at the Dutch royal family of April 30th - which took the lives of seven people, the perpetrator including, and several wounded who will be scarred for life - keeps intriguing. Now here is someone who was fired, who would be evicted because he was unable to pay the rent and as a divorced father was deprived of the right to see his children.

Yes, there are thousands or hundreds of thousands of people like him, if not millions. Luckily, hardly any of them decides to do an Attentat.

But even though poverty may have loomed for the late attacker, he still had a car, the best legal means to kill or hurt. It was a Suzuki.
I am not sure whether CNN mentioned the brand in its news item about the attack. But click on the illustration and find out what CNN has to say about Suzuki.

CNN is not broadcasting for the news ONLY ON CNN.
CNN is there for the advertisements.

And any advertisement for a brand of car is an advertisement for cars in general, as Erich Fromm has written. It projects a society in which it is perfectly normal and desirable to own your own four wheeled means of transport (which has to be bought on credit of course - oops, something going wrong with this these days).
And "creating" seven dead and several more wounded is a way of life.

Libertarian marxist André Gorz already summed up the case against cars in 1973.
Come to think of it, Dutch Christian anarchist Felix Ortt already wrote half a century before Gorz that it was a wasteful means of consuming energy - when you convert the costs you end up in proceeding at a speed of 5 km/h - the speed of a walking person - and you use quite a lot of irreplaceable resources for this result.