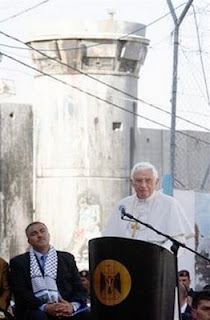 His holiness Pope Benedict was a member of the Hitlerjugend, as anyone of a certain age in Germany was. He was also enlisted in the armed forces, as any male was at his age in his lifetime.
I am not a Catholic, so I am not obliged to say it let alone think it but I will go along with the idea that it is the Holy Spirit Who decides who will be pope. There is a time to be Protestant and there is a time to let go of this protestantism and respect the position of the larger part of the one holy catholic Church.
Benedict is not my pope, he is the pope - heads of the Churches of Eastern Orthodoxy will always be mentioned as being pope of...

Visiting what is generally referred to as the Holy Land - a way to avoid difficult referring names as Israel, Palestine, and what most Israeli Jews call The Territories which for any decent person should be a scandal - he will be consistently reminded of his nationality.

It could have been expected that the pope would be blackmailed about his German background and what this means at his age. And he is. He will never be able to say it right. Neither will any successor, for that matter, of whatever nationality (s)he may be.

Without further ado let us search for the apologies about making profits by producing the gas for the gas chambers from these companies:

Capitalism is the worst mental disorder ever to visit humankind, and we are surrounded by this disorder all day and all night and we should accept it as a perfectly normal and decent condition.

I am lost for words actually because I really was so naive to think these companies were not allowed to be based in Israel.