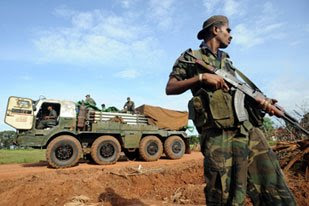 John Pilger reminds us of the role of the UK in Sri Lanka: as massive arms dealer to the racist and repressive government. At the same time the New Labour government asks the Tamil Tiger guerrilla movement to lay down its arms.
You certainly do not have to be willing to defend the Tigers in a moral sense to understand why they will be fighting on desperately. The Sri Lanka regime does not care about human life in general and Tamil human life in particular.
And it now says it will have dealt with the guerrilla within a few hours even .

A quick kill, just like the Old Labour government championed in Nigeria in 1967, against Biafra, the republic which was the result of fears of genocide of the people from the (South-) Eastern part of this colonial manufacture.
Dividing, killing, ruling. And of course: making money out of all three.

From a recent piece in The Guardian:

According to government figures, in the last quarter of last year Whitehall approved arms exports to Sri Lanka worth £1.4m, mainly components for communications equipment. This compares with under £1m-worth of UK arms exports to the country for the whole of 2007. "When the world needs co-operative solutions to global problems, the thriving international arms market points to a squandering of resources which the international community can ill afford," said Paul Holtom, head of Sipri's arms transfer programme.

More articles on the UK arms deliveries to Sri Lanka here and here (dating back to 2001). It is easy to find more.

In the case of Nigeria it was the USSR which also helped the junta with its quick kill (which lasted 2,5 years, incidentally). In Sri Lanka where so-called maoist Sinhalese racists are supporting the government, this fraternal socialist role is fulfilled by the People's Republic of China.