The Revolution isn't over in Nepal

There's no such thing as a complete revolution, a utopian end-point, as the Nepalese people are demonstrating at the moment (Links 10 May 2009)

After years of struggle; national strikes, Maoist and military imposed curfews, the bloodiest asassination of royals since the end of the Russian Tsars, and riots on the streets of Khatmandu, the Nepalese people finally overthrew the Royalists (2006) and last year and the communists stormed to power in a new federalist system.

Almost exactly a year later and the prime minister and some other goverment minister's are resigning in what Link and blogger Ben Peterson are calling a "soft coup" that suggests that Maoist and popular reform in favour of greater social justice are still being frustrated by monarchist military elites. 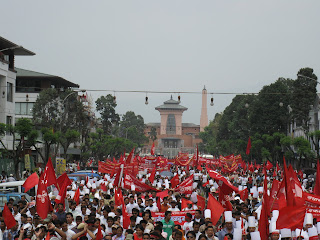 "The UCPN (M) [Maoist party) has called for protests in the streets until its demands have been met. "The protests have been many and all over the place”, Peterson said. “They are organised by a whole range of different groups. Every different group has its own protest. The mood is angry.”

The protests ranged from involving hundreds, to tens of thousands, he said. However, he emphasised that these protests occurred simultaneously — there could be dozens of protests in Kathmandu at any one time. “Many of the people I have spoken to at the protests were not Maoists”, Peterson said.

As example of the mood, he explained: “The other night I was at the bus park, and about 20 people just waiting around for a bus spontaneously started chanting against the president.”

The foreign media have attempted to play up protests by right-wing NC supporters. The Sydney Morning Herald even featured a photo of an NC supporters protest with the caption “People’s Power”. Peterson said that before the UCPN (M) left government, there were some tiny protests involving a few hundred people at most. Since then, no such protests had occurred.

In some cases the police have attacked protesters, including tear gassing a demonstration by the pro-UCPN (M) Young Communist League. Police repeatedly attack attempts by protesters, mostly Maoist women, to demonstrate in front of the president’s offices. Protests in that are have been banned, resulting in regular clashes.

However, the state has held off from trying full-scale repression.

So far, the UCPN (M) has also held back from full-scale mobilisations. It has yet to organise a centralised, all-out demonstration that calls the greatest numbers onto the streets together. However, as the likely futile negotiations by the anti-Maoist parties drags on, that could be about to change."