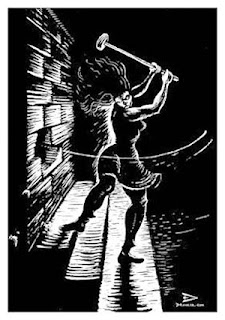 For a short time which I very intensively lived through I was a reporter for a newssite on religion and globalisation.
Yes, I know what some readers will think or say when I tell it was funded by a state loan. The state demanded the money back after two months, which no normal lender would have done.
That effectively was the end of any professional own reporting for the site, any chances of developing into something independent and it was the end of my journey through Organised-Religionland - which I had found very interesting.

The other day I had to look back on a piece I wrote in that short period not too long ago. A story which without my being a reporter would have gone unnoticed for me.
It was about a television programme aired by the evangelicals - who have their own licensed broadcasting company on public radio and televison in NL - can you manage to live for forty days without s**? A drooping and drooling presenter showed a girl who - we were told - was very easy to get and would not say no to whatever occasion was offered to her - but she wanted to let us know she was not the s*** people said she was.

When I look back at it my sadness about it - and a certain personal sense of utter dullness - comes back with a vengeance. I know we are not supposed to follow the multitude.
Yet, for the multitude this is the face of living christianity today.
About being or not being a s***. Questions about Jesus which I - who happen not to accept the Chalcedon decree about the divinity of Jesus - find of a despicably profane nature. Rather inconsistently I have to refer to one place where you can see what I mean.

It would have been healthier not to have seen it all.
There is not much difference with the story about anarchism - whatever clever things you might say about it, one of the usual idiots on the telly will blow it away within one second. With Christianity, the situation in the final analysis is not different.
It is all about being anti-sexual, bashing of gays and scorn of women, and you are not even supposed to throw back those stones...

Anyone for a provisional definitive consoling message?

Update
And a few minutes after my having finished this the paper edition of A pinch of salt lands into the mailbox and I have to laugh, just like about the cover of nr. 18. "Look kitten..."
Certainly a consoling message.